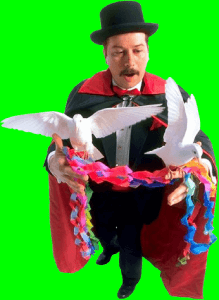 Stage Hypnosis has very little in common with Hypnotherapy.    The showman has an interest in wowing the crowd.   He wants to make it look like mind control.  There is no mind control just as there is no memory loss.  These things are mentioned to make the show more spectacular.   I have looked at several stage acts and it is very easy to explain exactly what is going on once you understand the principles of how certain people behave when hypnotised.

This is the interaction between the hypnotist and the subject.  As a generalisation people who are more extrovert  – are influenced by other people and tend to be more suggestible.    At the start of the show the hypnotist will do a suggestibility test like suggesting that your hands are stuck together.  Some people respond more to this than others.

The people that make for the best show are suppressed extreme extroverts.  These people learn from an early age that being outrageously outgoing doesn’t fit well in society unless they are permanently on the stage.  They learn to suppress their behaviour in order to fit in with society.  In Hypnosis their imagination is greatly enhanced and they find it easy to imagine doing the things you see them doing and so do it with ease.   This is an extension of your belief system – If you imagine vividly that you can do something then generally you will be more likely to be able to.   Someone who is normally quite quiet may be great at doing Elvis impressions.

Note in the early stages of the show how the Hypnotist will quickly get rid of anyone that easily comes out of the hypnotic state and will send them off stage.

During the show the hypnotist will take people in and out of a hypnotic state.  Each time he does so they go a little bit deeper in.  The subjects become less conscious the deeper the state of hypnosis.

The best examples become the show

It soon becomes apparent that some people are more comfortable doing daft stuff on stage than others – these become the centre of attention – it is not that the hypnotist has more power over these subjects – they are more game for a laugh.

People in the audience become hypnotised

This is very common because the hypnotist is making suggestions all the way through the show.  People that failed the initial suggestibility test may find that they then follow subsequent suggestions and may even listen to the hypnotist as if he was talking to them directly.

People only behave within their own values

When subjects are hypnotised they will not do anything they do not want to do.  When a hypnotist suggests to someone that they can imagine an onion as an apple then if they are happy to go with that suggestion (and not everybody is) then they may cheerfully eat an onion as if it were an apple.  It is not mind-control – it is compliance and being game for a laugh.

How does hypnotherapy differ from Stage Hypnosis?